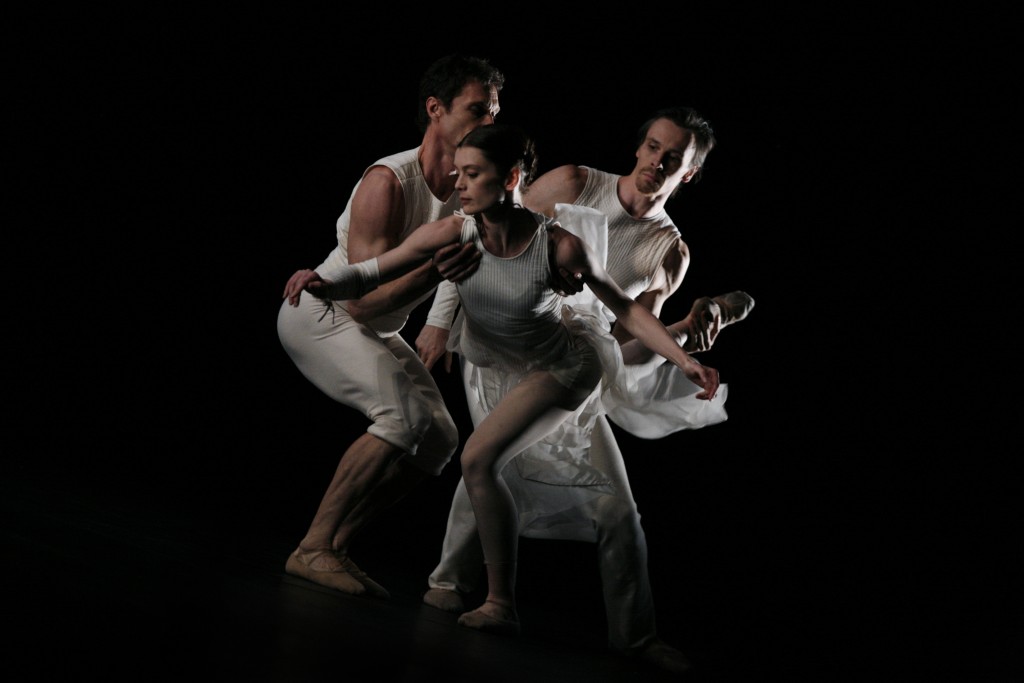 Part of Pennsylvania Ballet’s Balanchine and Beyond program

“I wanted the work to be abstract. But a bird flies past every once in a while.” Trisha Brown

Brown’s own black and white ballet.

O zlozony / O composite (2004) combines the richness of Brown’s most complex movement and partnering with the refined action of classical dance. The ballet was inspired by the poetry of Polish writer Czeslaw Milosz and Edna St. Vincent Millay, which is incorporated into Laurie Anderson’s score. Brown infused her abstract dances with subtle but recognizable imagery and emotional expression in the latter part of her career. Here the dance unfolds in an atmosphere of hushed mystery created through the music and a spectacular backdrop by painter Vija Celmins.

Floor of the Forest – Past event Floor of the Forest is one of Trisha Brown’s most playful equipment pieces. Suspended in air, dancers slip in and out of clothing on a loom-like installation of clothesline.

*After the performance on October 24 stay for the free gallery talk on Trisha Brown: (Re)Framing Collaboration, an exhibition of Trisha Brown and her collaborators’ art at 6:15pm and the 8pm performance of Proscenium Works, 1979–2011 (ticketed).

**On October 25, there is also a 1:30pm free film screening that includes James Byrne’s view of Set and Reset from within the dance, footage of the original Man Walking Down the Side of a Building, and other iconic works. 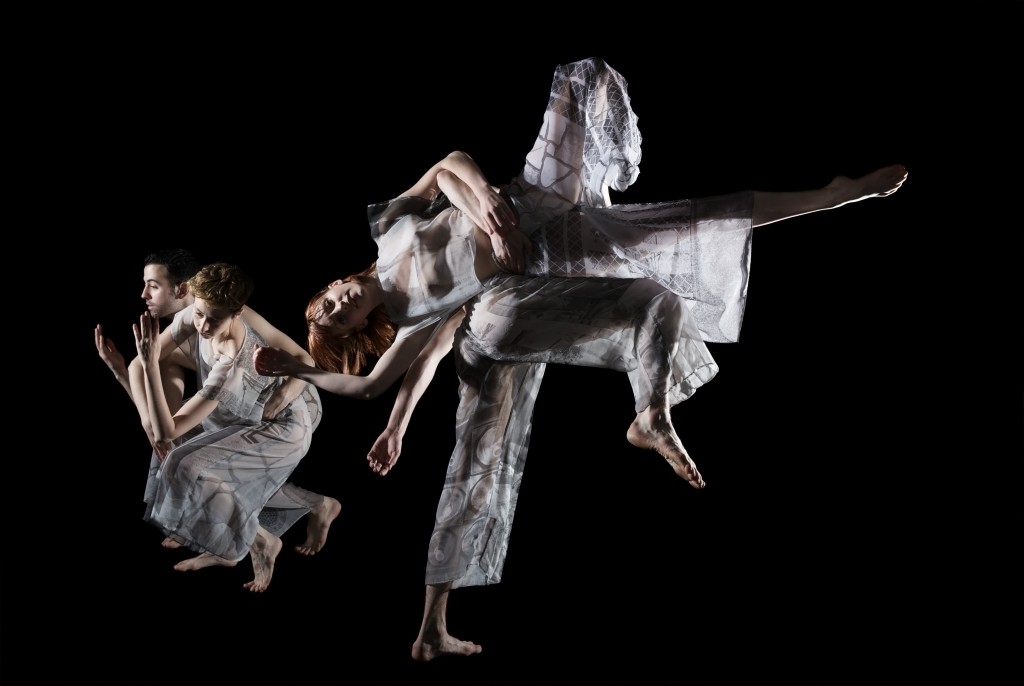 “I set two different phrases in opposing directions, aiming them like two arrows at each other. All that exquisite maneuvering that happens instinctively so as not to get hit or hurt was part of what I loved.” Trisha Brown

“Set and Reset is unmistakably Miss Brown at her most tantalizing. Her virtuosic dancers exhibit a quality of movement that is distinctly hers—dartingly quick but so fluid that the body seems a conduit for flowing energy.” Anna Kisselgoff, The New York Times

Set and Reset (1983)
The seductively fluid movement alongside the sharply defined configurations in this Trisha Brown masterpiece became a hallmark of her work. With the constant charge of Laurie Anderson’s score, Set and Reset is nonstop movement, full of quick explosions. At the edges of the stage dancers are half in/half out, held at acute about-to-fall angles, their movements cut short to catch fellow dancers hurtling through space. Choreography Trisha Brown Sound Laurie Anderson Visual Design and Costumes Robert Rauschenberg Light Robert Rauschenberg with Beverly Emmons

If you couldn’t see me (1994)
A dance where the performer never faces the audience, a journey between presence and absence, the visible and the hidden. If you couldn’t see me is the final solo that Brown created for herself, and a collaboration with Robert Rauschenberg. The soloist is witnessed from behind; she never turns to face the audience. She relies on her body’s suppleness for personal expression. Now this “absence” of the dancer’s face is emblematic of Brown’s present retirement. Choreography Trisha Brown Sound, Visual Design and Costume Robert Rauschenberg Light Robert Rauschenberg with Spencer Brown

*Come early October 24 for a free 5:30pm performance of Floor of the Forest, and a free gallery talk on Trisha Brown: (Re)Framing collaboration, an exhibition of Trisha Brown and her collaborators’ art at 6:15pm. Refreshments served. 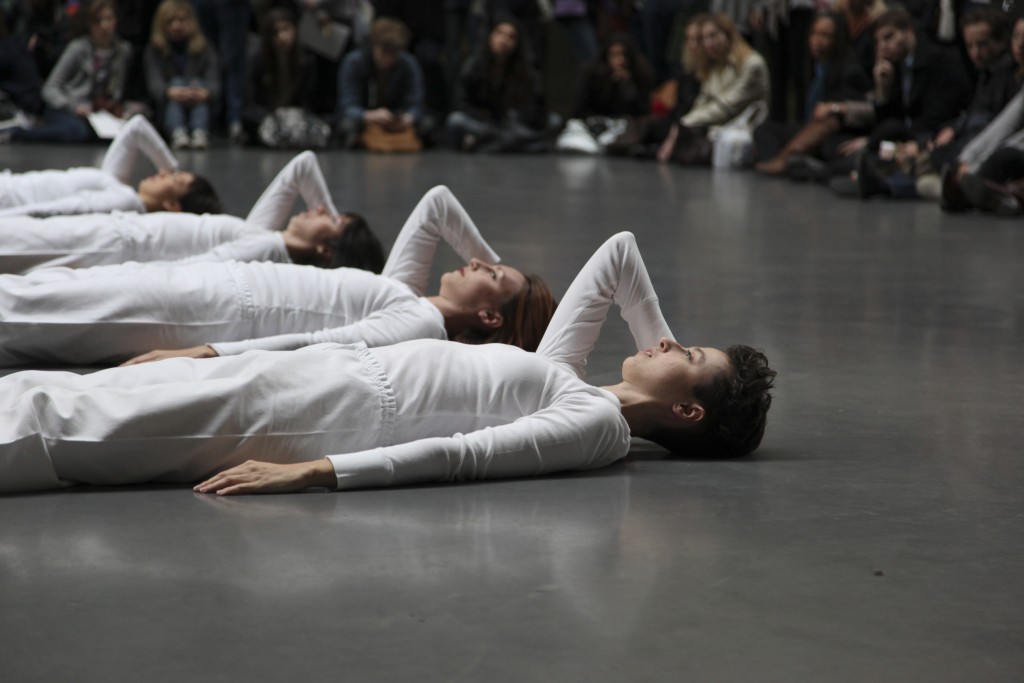 “I decided that I should make the structure as visible as the dancing.” Trisha Brown

“[Trisha Brown is a] master of simplicity with a dose of humor. The idea of a line, and the endless possibilities of how it could be assembled and dissolved, was a theme in [her early] work.” Wendy Perron, The New York Times

Trisha Brown’s pioneering Early Works, created between 1968 and 1975, blur the boundaries between performance and visual art. Brown challenged gravity, time, and our usual sense of orientation: she made use of “equipment,” such as ropes and harnesses, and explored motion and counterbalance, having her dancers lean far off center while remaining standing, moving with the help of other bodies. These structures resulted in aesthetically delightful and humorously sly performances. The seminal Early Works are some of Brown’s most radical departures from conventional performance: stripped-down, striking visual events for outdoor and gallery spaces.

The many short works to be performed include Leaning Duets, Sticks, Spanish Dance, Group Primary Accumulation, and Figure 8. From the playful to the complex and mysterious, these dances flow into different sections of the space; audiences traverse the space from one location to the next along with the dancers.