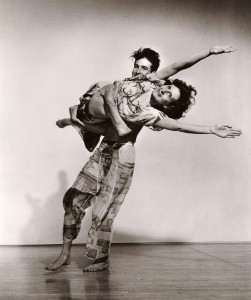 Originally published by Dance/USA’s From the Green Room, and later on wendyperron.com, and is reprinted with permission.

Trisha Brown is becoming more sacred to us every year. Not only is she a great artist who pushed the boundaries of contemporary dance, but she is also a fine human being, an example of compassionate leadership. While dance legends like Martha Graham and Jerome Robbins were notoriously “difficult” to the point of occasional cruelty, Trisha was always respectful, nurturing and generous. She fulfills the promise of a new, feminist way of being an artistic director.

Having danced with Trisha in the 1970s, when the company was just five women, and having followed her choreography since then, I have felt close to the work aesthetically and emotionally. On this occasion I would like to talk about the two categories of gifts she gave us: as an artist and as a leader. Now, years later, I can rub my chin and say Ah yes, I see the influences of Anna Halprin, Simone Forti, Yvonne Rainer, or Steve Paxton. But at the time, this event gave me a pleasant shock that brought me up close to Trisha’s singular imagination. I wanted to dance that way—with an alert mind and a relaxed, pleasurable body.

She has said she felt sorry for spaces that weren’t center stage—the ceiling, walls, corners, and wing space. Not to mention trees, lakes, and firehouses. She caused a revolution by simply, sweetly, turning to spaces that other dance-makers don’t. But she also caused a revolution in the space of the human body. She rejected the pulled up stance of ballet and the inner torque of Martha Graham. She loved Merce Cunningham’s work but she had no wish for dancing bodies to be so upright. She was going for something else, something more yielding, more off-balance, a way for the energy to flow on unusual paths through the body. In her choreography the pleasure of surrender coexists with the willpower of adhering to a rigorous structure. (For a full bio of the choreographer, click here.)

Trisha’s earliest works were improvised. She had learned to deploy simple structures from Halprin when she studied with her in California in 1960. In Trillium (1961) she took a basic improvisation exercise to choose when to lie down, sit, or jump, and did it her own way. “I made my decision about lying down and jumping at the same time,” she said in a 1980 interview. By all accounts, Trillium was a wild solo that made people believe she could be suspended in the air. Trisha often asked her dancers to improvise based on either a loose idea (e.g. “Line up” or “Read the walls”) or quite tight verbal instructions. She wanted the look of improvisation, the feel of not knowing what you were doing until you did it. That aesthetic reached its apex in Water Motor(1978). Babette Mangolte’s film of that exhilarating solo has become essential viewing for students of postmodern dance.

When she taught us a choreographic sequence, her movement was so elusive that I remember thinking, “She teaches it as a solid but she dances it like a liquid.” The key to attaining that liquid quality was to know in your own body how one impulse triggers another, to know exactly what and when to let go. While Trisha rejects the term “release technique,” the dancers have to be precise about utilizing release as well as strength.

Lines vs. Chaos, Rigor vs. Sensuality

The lovely paradox is that she also insisted on containing this sense of discovery within a rigorous visual or mathematical order. In Line Up, which we made collectively in the mid 70s, lines of people would materialize and dissolve—like following one’s own thoughts.

She brought nature into the studio. She loved her home territory of the Pacific Northwest and, come summer, she often returned there to take her son backpacking. While teaching one phrase of “Solo Olos” (part of Line Up) she said, “Imagine you are seeing Puget Sound in the distance and are tracing the length of it with your fingers.”

But it wasn’t landscapes alone that captivated her; it was the human body in an environment, for example the inevitable sensuality of the body up against the absoluteness of lines.

In Group Primary Accumulation (1973), four or five prone women move the right arm from the elbow down, then repeat that, then go on to the second move of raising the left arm from the shoulder, repeat both and so on, up to 30 moves. The pelvis lifts softly on move # 7—in a meditative way of course. The dance is incredibly sensual to do and to see, and yet the accumulation score keeps the mind strictly focused. (Click here to see a 2008 performance of it in Paris.) While we were on tour, Trisha once said, “When I am doing Primary, I’m thinking, ‘This is all there is.’ ” And then there’s the delightful “Spanish Dance” (1973), wherein five women tread slowly across the stage, accumulating one at a time to form a crush of bodies that hits the proscenium wall on the last note of Bob Dylan singing Gordon Lightfoot’s “Early Morning Rain.” While nothing much happens, each woman is sandwiched by others, flesh on flesh, swaying pelvis on swaying pelvis. The audience can see where the line of women is heading but the physicality of it still elicits chuckles of delight. END_OF_DOCUMENT_TOKEN_TO_BE_REPLACED

This short video features Trisha Brown talking about her work, plus clips of her drawings and a video installation, and performances of Accumulation and Floor of the Forest. The video was created as part of the arts festival Docemnta 12 in Germany in 2007. 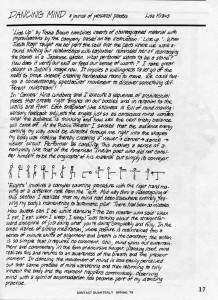